My Internet History in Web Browsers

I was recalling recently of my history with the Internet. Having been both an active user and developer for at least the last 23 years (that seems strange), I think that there is nothing that so completely has dominated my internet life as the browser that I have been using.

Year to Browser Use (Percentage) 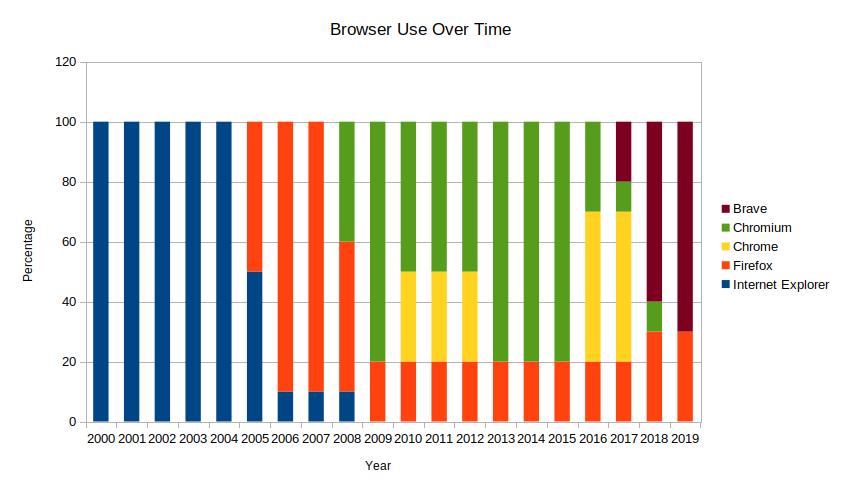 In the early PC year (which probably stretch before 2000), my PC life was dominated by Microsoft. I remember making web pages in Frontpage and IE6 (which was pretty great at the time). I believe that I experimented with Netscape, however, moving off the Microsoft ecosystem was not really a big thing.

From 2005, I began to experiment more with other browsers and over this time, Firefox become my predominant interface to the Internet. It was a welcome difference from IE and had better tab support at the time. I still used IE at points too, however, as an early on developer, Firefox came bundled with some nicer extensions and also a feeling that I was working with a more open tool that IE.

2008-2016 - The Switch to Linux and Professional Development

I switched my main OS from Windows (XP) to Ubuntu around 2008. This was during my MSc IT course and when working with a whole bunch of software tools (PHP, Javascript, Git, Apache, MySql, Python) the support on Linux was so far outstripping Windows that it made sense to make the switch. This also brought with it a different way of managing packages and I found myself actually no longer to even operate IE (because it doesn’t work on Linux).

My main browser for a time was Firefox as it was bundled with Ubuntu and later I moved to Chromium, because of its support for Chrome which when it came out was like a breath of fresh/fast air.

Between 2015 and 2017 I changed jobs (more on my about page) and moved into the work of OSX. This didn’t have native support for Chromium and I also have a whole bundle of video conferencing tools that I used (Hangouts/Meet, Zoom, WebEx, BlueJeans, GoToMeeting). This moved me back towards Chrome as a main operating system. I also started working somewhat with iOS using Chrome and found it useful enough.

From 2018, I became more frustrated with both ads (and the associated slowness introduced) and the fact that most of the ads that I viewed were directly related to the company I was working for, or things that I worked using. To combat that I originally started using Brave Browser on my Android phone, and frankly I was blown away by the ad-blocking and the speed improvements. At the time, Brave was relatively new but it felt like a step change from the world of Chrome where I was surrounded with advertising that sometimes totally crippled my phone and often blocked my browser interface on Desktop.

There has obviously been a large amount of changes in the internet and for me this seems as big a change as when Chrome started taking over from Internet Explorer.

At the moment, Brave is my number one home and work browser (expect when I am on my Chromebook, but that is another story). It is fast and now is based on Chromium which means that Chrome extensions work in it (great for video conferencing and other things).

As of today in the last 9 months Brave has:

I couldn’t leave without mentioning mobile browsers, as these are in use mainly for casual browing (or for testing when I do web development). Pretty much I have used 2 browsers whilst on Android (since around 2010). Chrome 2010-2018, Brave 2018-today. I mainly use Brave because of all of the benefits in not downloading or running ads, trackers and extra stuff on my mobile. Current numbers suggest that since I started using my current phone (around 1 year):

The Browser is the UX for the Web

Generally speaking, the browser is the UX for the Web. There is more traffic that just web traffic running over the Internet (a lot more), but most people generally interact with the Web through a browser and how those browser operate or choose to operate shapes user experience on the internet. Imagine a browser without a back button, or not having an address bar?